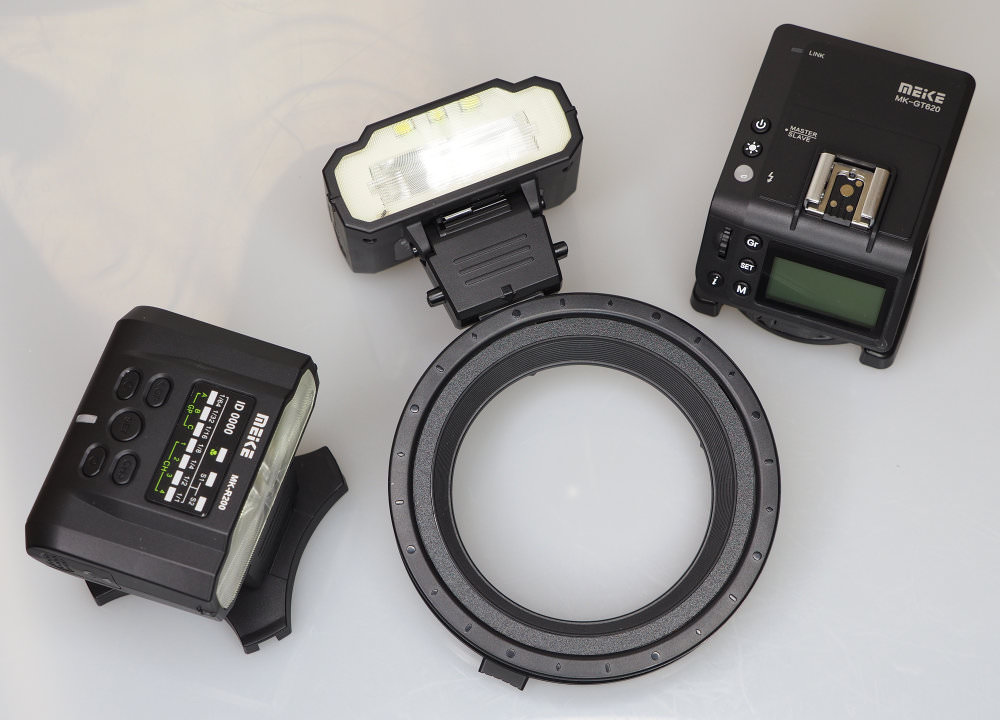 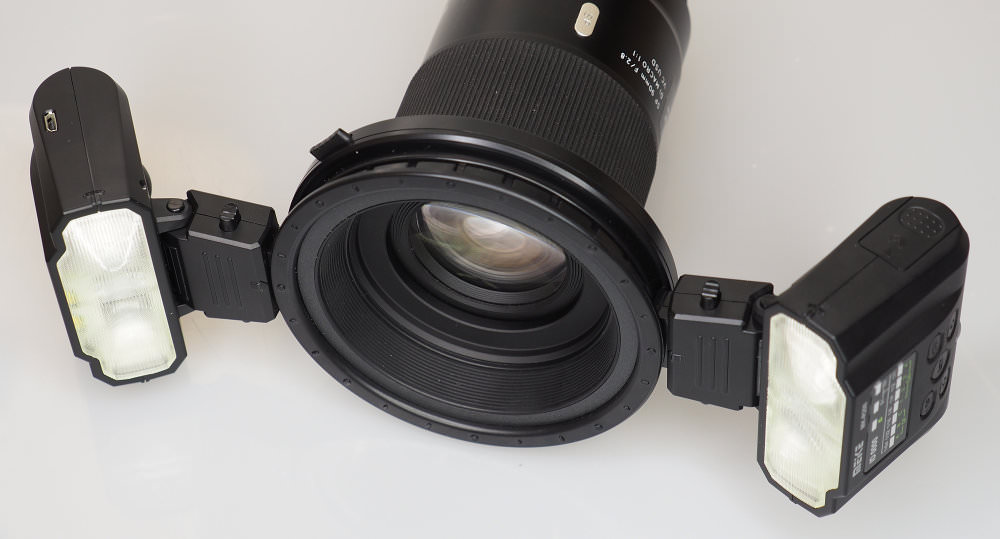 The Meike MK-MT24 is an all-in-one solution for macro flash photography, with everything you need in the box. The use of two small flashgun's, the R200, with adjustable direction is more versatile compared to a standard ringflash, as it'll allow you to bounce the flash heads and adjust the direction of the light.

Included in the box:

There's a small pouch for the provided gels, a drawstring pouch for each flash and trigger, and there's a larger padded bag to hold everything when you've taken it out of the boxes. A 2-year warranty card is included, and an instruction manual.

The MT24 is like a more advanced version of the Meike MT14 ring flash. Priced at around $299 / £215 - this setup lets you control the direction of flash more precisely, and you can use the flash heads as a bounce flash for example.

The MK-R200 flash heads feature 3 LED lights that can be used to assist focus, or for temporary illumination, and take 2x AAA batteries.

The top MK-GT620 trigger also features LED lights to assist focus or for video illumination and takes 2x AA batteries. On the back is an LCD screen so that you can control the flashguns. 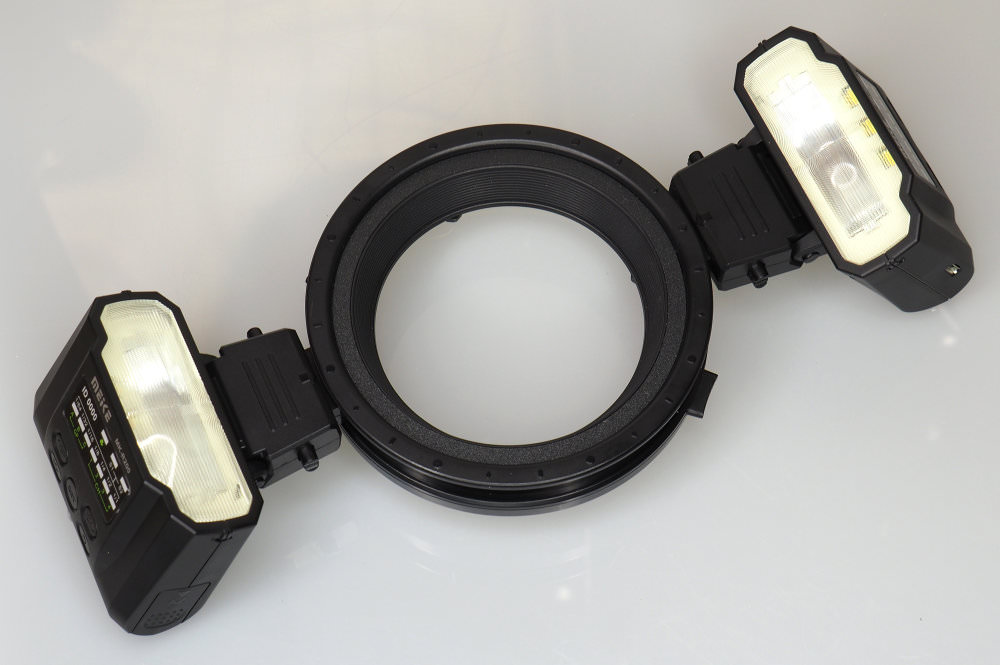 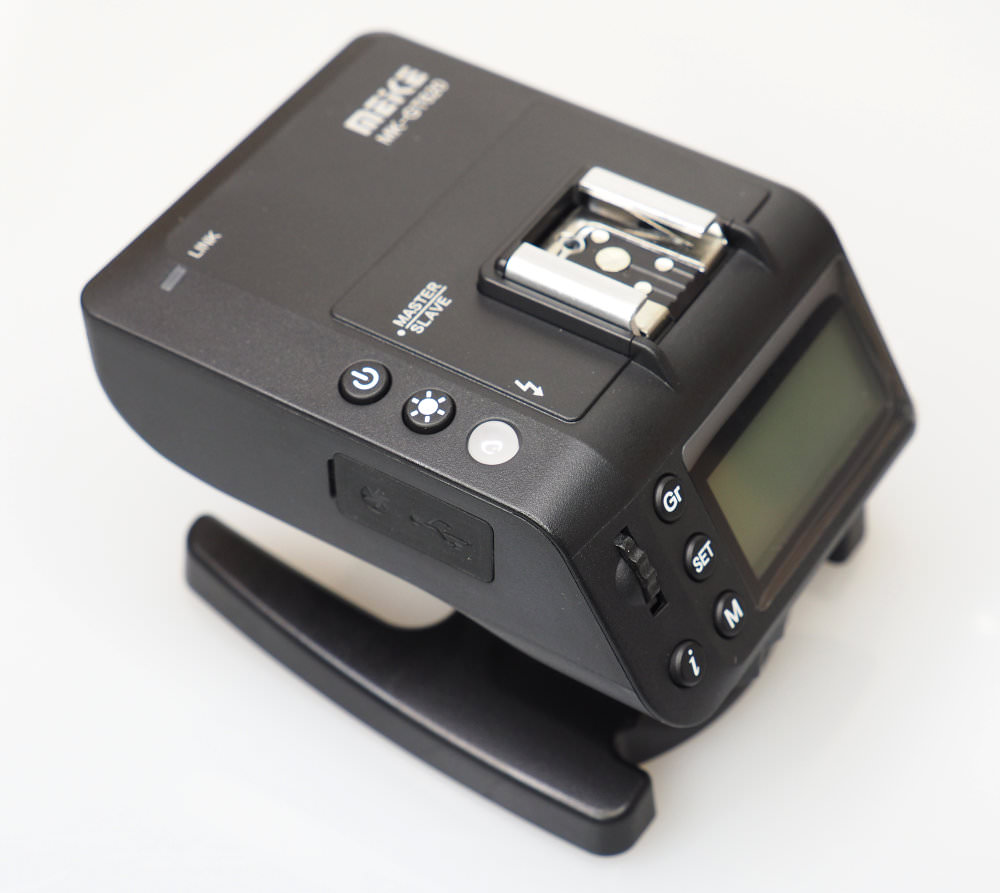 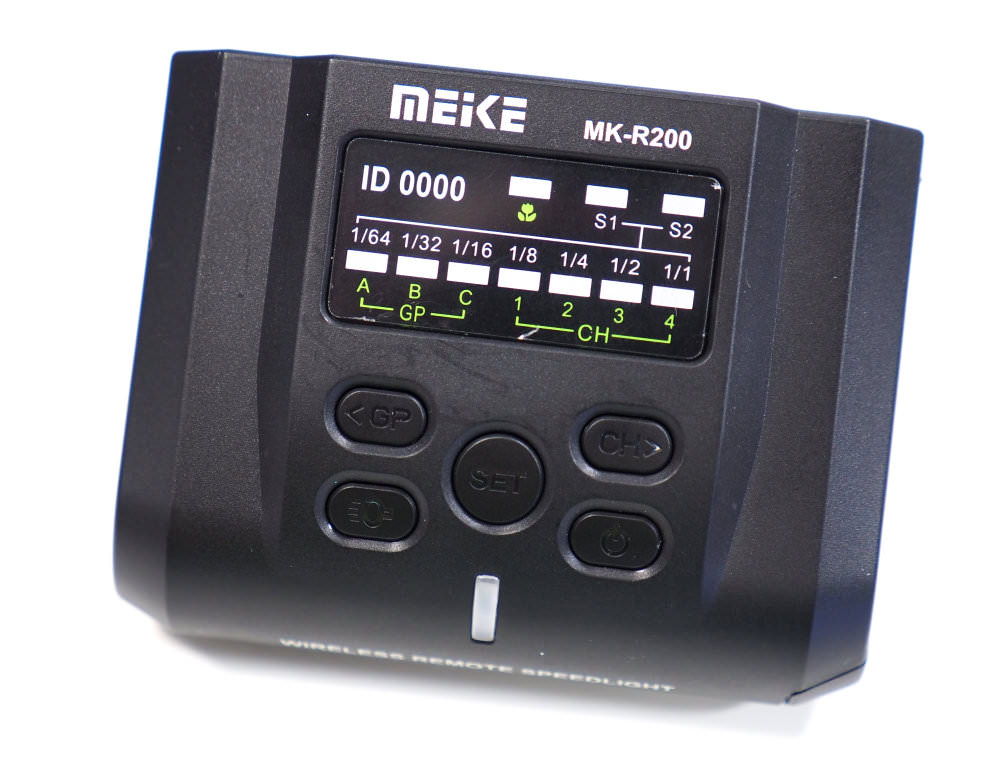 The controls on the remote flashgun are quite easy to use, with buttons for:

There's a USB port on the side to upgrade the firmware if needed, and on the other side is the compartment for 2x AAA batteries.

It would be nice if the buttons were labelled more clearly. The lights on top show which group and channel are selected, however, they could be brighter and appeared a little dull (in comparison, the Trigger, below is much clearer). There is a main light on the back of the speedlight, which will turn solid green when the flash is ready to shoot.

The build quality of the flash head is reasonable, and they are compact with the ability to tilt them down 45 degrees and up/out 60 degrees. One area that could be better is the battery cover, which is a little wobbly when opened. When closed it is not an issue though.

On top, there is a flash hot-shoe, and there are buttons for:

On the back there is a dial, plus:

On the side, there is a micro USB socket and 2.5mm jack sync socket, and on the other side, there is a tripod socket. Underneath is the compartment for two AA batteries. The hot-shoe connection for the camera can be locked, and it features a rubber surround to protect against water ingress. On top is a flash hot-shoe, so you can add another flash if you so wish.

The LED intensity can be adjusted with the rear wheel, between 1 and 12, with twelve being the brightest. The build quality of the trigger is good, with better labelling than the flash heads, and a good weight to it.

The options on the trigger are fairly straightforward to set. The more advanced your set-up the more complicated it can become. On default settings, straight out of the box the system will work. You can then adjust flash compensation individually or as a group. You can also adjust the flash compensation from the camera, however, this change doesn't show up on the rear screen of the main trigger. You can manually adjust each flash from the trigger, as well as set the flash distance from 18 to 200mm, or leave it on Auto. 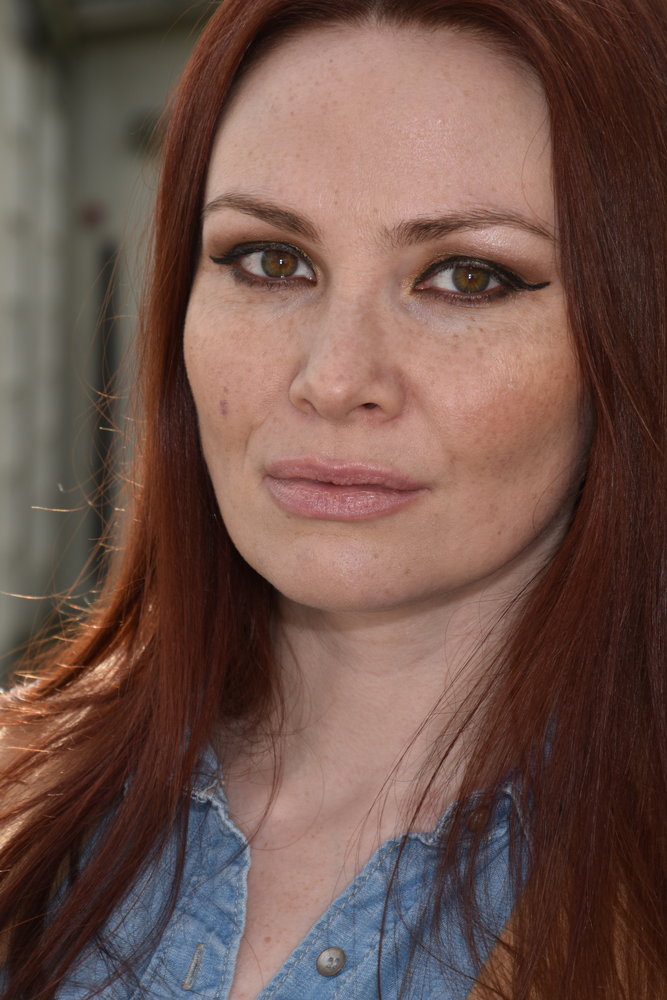 Sample Photos - The results produced using the flashguns attached to the front of the lens for portrait shots produced good results with even lighting and reliable exposure, although care needs to be taken to ensure that the flash is not too harsh for your subject.

For macro use, the results will depend on your subject and it's surroundings. In some of the shots we took, due to the subject, and the placement, the shadows from the flashguns is quite noticeable. Using the diffuser does give the image a warmer colour cast. We'd suggest additional diffusion is likely to be needed to avoid harsh flash and harsh shadows for some close-up macro photography.

The Trigger will allow LED lights to be switched on and left on as a modelling light, however, the remote flashgun LED lights can only be switched on temporarily, and will automatically switch off after a while. We used the flash kit with the Nikon D810.

The Meike MT-MK24 kit is available for around £229 from Amazon UK, which is excellent value for money compared to other wireless flash kits from the main brands, such as the Nikon R1C1 Close-up Speedlight Commander Kit at £629, or Nikon R1 Close-up Speedlight Remote Kit at £439. The Canon MT-26EX-RT Macro Twin Lite is £1079.

If you're looking for a twin ring flash, then the Meike MK-MT24 is certainly a proposition that offers high value for money, being roughly £200 less than main brand solutions. They can be used as a macro ringflash, for macro photography and portraits, or you can use them remotely for more creative photography. The kit provides everything you need to get started with macro flash, and other flash photography.